Announcing the Cast of "The Awesome 80s Prom"

Bradford Little Theatre (BLT) is totally stoked to announce the cast for “The Awesome 80s Prom,” currently in their second week of rehearsal. The show will be performed in the Afterwords Club at Beefeaters on February 18, 19, and 20.

“This cast is developing a terrific chemistry with each other already. They are high energy, fast learners and have already had some hilarious moments during the rehearsal process. They are pumped to bring this show to the community,” states director Kristin Asinger.

The cast of 20 is filled by a mixture of familiar faces and newcomers to the BLT stage, including some who are making their acting debut in “The Awesome 80s Prom.” 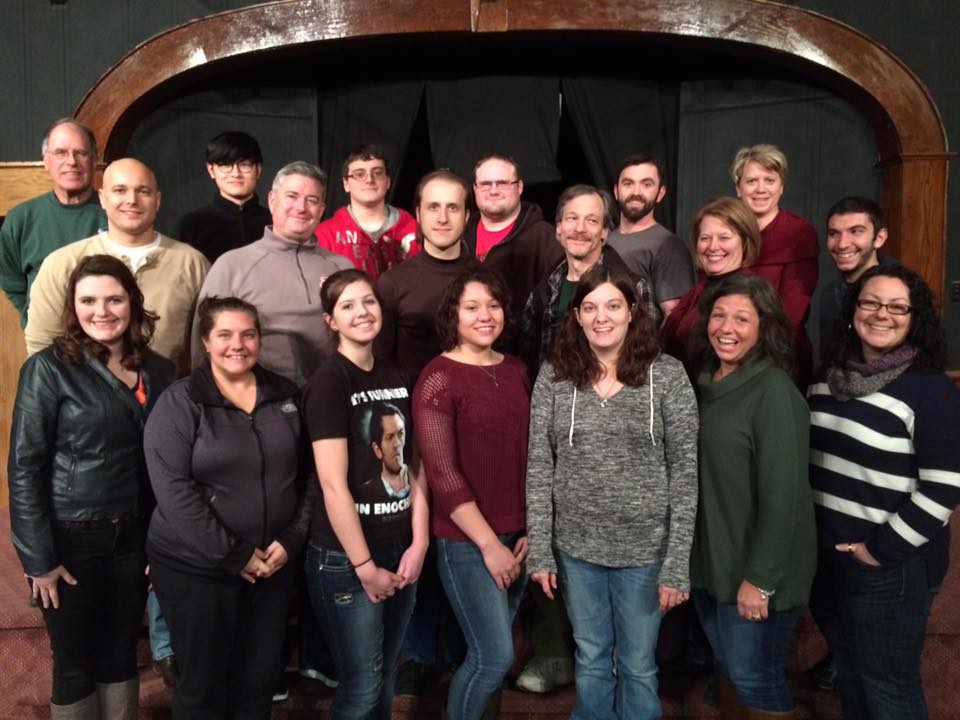 When audience members arrive for the show, they will be greeted by perky prom committee chair Missy Martin and then checked for prohibited items brought into the prom by school Principal, Mr. Richard Snelgrove who feels it is his responsibility to keep the prom under his tight control. Martin will be played by Sandy MacFarlane of Bradford and this is her second production with BLT, having previously played Detective Sharona Pinter in “Stay as Dead as You Are”. David Merwine, also from Bradford, has performed for several BLT shows including June’s “Shrek The Musical.”

A warm welcome to the main prom room will come from senior class president Michael Jay, played by Pitt-Bradford student Kyle Heffern of Cooperstown, PA, and drama teacher Mrs. Patty Lascalzo, played by Bradford’s Connie Shanks. Shanks and Heffern last performed in Kiwanis Kapers together. Shanks has been in several BLT and Kiwanis Kapers shows and Heffern has previously performed in “Legally Blonde: The Musical” at Rocky Grove High School.

As the evening unfolds, drama between the members of Wanaget High’s Class of 1989 heightens. Head cheerleader Whitley Whitiker, played by Mckenzie Forrest, and her two best friends Heather Wellington and Heather Wynters do everything they can to get Whitley crowned as prom queen. Forrest is from Olean, NY and has directed and performed in several shows with OTW. This production will mark her debut with BLT as well as for Alexandra Fleming (Wellington) and Tiffany Mager (Wynters). Mager is from Bradford and this will be the first time taking the stage. Fleming is from St. Mary’s, PA and has been in several shows in her hometown, including “Grease,” she is also in the student a capella group at Pitt-Bradford.

The cheesy emcee and DJ for the evening will Ms. Johnnie Hughes played by Bradford’s Allison Ambrose. Ambrose started acting in plays in high school and has been in several Kiwanis Kapers shows. Last year she made her BLT debut in “Jesus Christ Superstar.”

Devon Baumgardner, of Smethport, will be playing the charming and egotistical captain of the football team Blake Williams. Baumgardner first took the stage at Edinboro University with” The Comedy of Errors” and “Play it Again Sam.” He also had a small speaking part in the locally filmed 2010 movie “Unstoppable.” Blake’s “wingman” and center for the Wanaget High School Beavers football team is Joshua “Beef” Beefarowski. Beefarowski will be played by Bradford’s Chris Lathrop who is no stranger to the stage. Chris has been in eight BLT productions and several Kiwanis Kapers shows. Most recently he could be seen at Togi’s Playhouse in BLT’s “Aesop’s Fable-ous Christmas Tree.”

The drama queen of the class is the fabulous, yet bitter, Dickie Harrington who feels he was cheated out of the starring role in the most recent school musical. Harrington will be played by Limestone, NY native Brandon Tully who was in “The Tempest” and “The Crucible” with BLT and also participated in Pitt-Bradford’s theater program as well as with the Pitt improv team.

Although class nerds, Kerrie Kowalski and Louis Fensterspock, come to the prom together, they aren’t actually “together.” Kowalski will be played by BLT board member Rawny Reed, of Bradford. Reed was most recently in “Aesop’s Fable-ous Christmas Tree.” Ryan Bailey, a student from Bradford High School, will play Fensterspock. This will be Bailey’s first show with BLT and his second performance, having made his stage debut in November with Kiwanis Kapers.

As the class rebel, Nick Fender’s goal for the evening is to disrupt the prom activities as much as possible and everyone attending the prom is fair game for him to pick on. Tim Asinger, from Bradford, will be playing Fender and has had six years of improv experience including Level 1 improv training at Second City in Chicago. He has been in two BLT shows including “12 Angry Men” and many performances in Kiwanis Kapers.

No high school experience is complete without getting to know the foreign exchange students, and this year Wanaget High School is hosting Feung Schwey, the Asian exchange student, and Miss Inga Swanson, from Sweden. Schwey will be played by Pitt-Bradford international student, Kiu Yu “Donald” Lui from Hong Kong. This show is Liu’s debut performance. Swanson will be played by Limestone, NY resident and “half-Swede” Candy Tingley. This is Candy’s first on stage performance with BLT, but she has performed with BCPAC in the past and has worked backstage on several other BLT productions and many Kiwanis Kapers shows.

As a freshman and the President of the Audio-Visual Club, Lloyd Parker’s responsibility is to take official prom pictures of everyone in attendance and his twin sister Molly is there to assist him. Lloyd will be played by Dave Geitner of Bradford. Geitner has performed in Kiwanis Kapers and was part of the barbershop quartet in BLT’s production of “The Music Man.” Molly will be played by Pitt-Bradford student Amanda Hollabaugh who is also in the a capella group at Pitt.

Rounding out the cast are the 80s celebrity impersonator and the school mascot. Patrick Kirk of York, PA is a student at Pitt-Bradford who will dance as Michael Jackson in the show. Kirk has experience with talent performances, floor shows, and theatre productions. BLT board member and Bradford resident Lori Johnson will attend the prom as Wanaget High’s school mascot, the beaver. Johnson has been in several Kiwanis Kapers shows as well as with Bradford Little Theatre, most recently as Dragon in “Shrek The Musical.”

Tickets are currently available through BLT’s outlets - A Slice of the 80s, Graham Florist, Ott & McHenry Pharmacy, and Togi’s Family Restaurant - or by calling Marcia at 814-598-1101.